All My Sisters and Brother and Me…

Let’s talk a little bit about sibling rivalry and other such problems … BECAUSE the positive or negative influence that siblings can have on one another is sooooo powerful.  Last week, I had several adult clients all in the same few days who were working on some self-repair as a result of sibling challenges.  Each of these clients needed to improve confidence and reduce emotions of anger, self-judgment, and sadness due to siblings mistreating them in some way as a child and in some cases continuing into adulthood!

If you have had a negative or difficult relationship with a sibling, the symptoms you are having and the pain you are feeling should not be minimized or underestimated…

For one thing, people spend a lot of waking hours with their brothers and sisters while growing up.  I have heard countless stories of people over the years who were molested, hit, teased incessantly, tied up, locked in closets and more… the stories are endless and as varied as the families that people come from!  Not to mention the fact that in some families, one form of intergenerational emotional abuse includes parents showing a lot more favoritism, time, or attention towards one child while neglecting the needs of other children.

I have witnessed firsthand how much older siblings have power over younger brothers and sisters.   By observing the interactions of my own children with one another (not to mention I have also observed neighbor kids, nieces and nephews, and my clients)… I have decided that these relationships are nearly as important as a parent-child relationship.  After all, younger brothers and sisters are almost always seeking the approval and attention of an older sibling.  An older sibling is ultra-cool in the younger child’s eyes.  In some cases, an older sister or brother will consciously or unconsciously use the power of merely being an ultra-cool older child to their advantage.

Even my own kids just had a fight last Wednesday evening and they are almost 9 years apart!  I will spare you the most of the details.  But suffice it to say that younger siblings do provoke older siblings as well.  And when that happens a 17-year-old can revert to acting like they are 10 years old to get revenge quickly!  LOL.

So, given all this information what do you do about sibling rivalry if you are a parent or a caretaker?

You must help even out the playing field, plain and simple!!!  A lot of parents and other caregivers tell children to work out problems on their own.  I completely disagree with this hands-off philosophy.  Children need you to know what is going on with some of their interactions and to intervene when there is conflict and provocation!  If you are not spending at least some time each week intervening in sibling conflict, you are likely not doing enough to prevent possible long-term problems.

When there is some type of fight that breaks out, I recommend taking the time to listen to each child separately and then implementing consequences for problematic behavior.  Younger children need to be held accountable for provoking older siblings.  Older siblings need to be held accountable for talking down to younger siblings or for repeatedly ignoring them instead of sometimes giving them attention or praise.  In almost all cases where people are emotion allyharmed by siblings, it was because caregivers either showed a lot of favoritism to one child OR because the caregivers had a hands-off approach to ongoing rivalries.

In my own family (see a picture of myself with my brothers and sisters below), I was the oldest of five.  I recall some serious consequences when my mother found out I was not being kind to my younger sister.  She also made a lot of attempts to try to keep things fair between us.  This was good leadership, and I am thankful that she intervened to help us have closer relationships!

If you are making a lot of attempts to be fair and to intervene, then you are more likely to help your children create loving and long-term friendships with their siblings, keeping your family healthier and happier!

If you need help with sibling rivalry in your family … or to heal memories with a sibling that were painful for you, please reach out to one of our Relationship Repair Associates today. 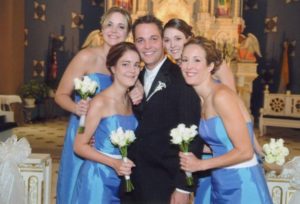 We Have Appointments Available During this Holiday Season

Teletherapy Should NOT Just Be Your Flavor of the Week

The Intimacy of Teletherapy During the Pandemic